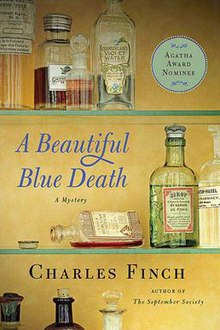 We all know the saying don’t judge a book by its cover…all I can say is I am so glad I did exactly that with the first Charles Finch book, A Beautiful Blue Death.  The cover drew me to the book, the author drew me to the story, and the story drew me to the series. The protagonist, Charles Lenox, begins the series (I always recommend reading the first in a series just to set the stage…each of these books can be read alone but in this case best to start at the beginning and then read them in order or as you like!) as a detective and just as his career takes many paths so do the cases he solves.  While I do love a good historical mystery, especially an English one set in the 19th century, I also like character development and side plots…Finch excels in giving us these in great depth.  In addition, each book is a history lesson and gives us insight into England at this period of time, its morals, manners, and murders!!!

I have just finished reading The Inheritance, the tenth book and newest in the series, and one I have mentioned in other Books Books Books posts.  I must say it didn’t disappoint!  Charles, his partners, and Scotland Yard are investigating several cases, the one indicated in the title is the primary story and takes us back to Lenox’s youth and a friendship made there. Looking into a mysterious inheritance and helping his friend takes Lenox into very interesting territory.  Finch has given Lenox a wonderfully interesting cast of characters including his partners and his family, Lady Jane, his wife and his daughter, Sophia.  What I like about including a family life is that it makes Lenox more believable and human (and he is very much both), which is a major part of each book. The plot, as is usual in the Lenox series, takes many twists and turns.  It takes you into the lives of high society of the era as well as the gangs in the back streets of London’s East End.  Lenox is a very modern man living at a time when major inventions and scientific discoveries were being made, all of which he accepts and finds fascinating, and all happening in Victorian England. (I hope you all are watching Victoria on PBS, I was totally entranced with the first episode.)  It looks at the traditional politics of the time (not much different than today, all about power and money!!!) without being political. Once again a book I didn’t want to end…I become a part of the time (I am, after all, a major Anglophile!!) and the stories that Finch enticingly weaves. As you can tell, I am a huge fan of Finch’s writing and of his wonderfully developed and continuing to grow “hero” Charles Lenox.  More please and soon…..

http://www.bookcellarinc.com  My independent bookseller of choice